In 1970s John Horton Conway (British mathematician and University of Cambridge graduate) opened a whole new field of mathematical research by publishing a revolutionary paper on the cellular automaton called the Game of Life. Suffice it to say that the game which he has described with four simple rules has the power of a universal Turing machine, i.e. anything that can be computed algorithmically can be computed within Conway's Game of Life (outlines of a proof for given by Berlekamp et al; implemented by Chapman as a universal register machine within the Game of Life in 2002).

Glider in the Game of Life

The Game of Life is a zero-player game, i.e. the player interacts only by creating an initial configuration on a two-dimensional grid of square cells and then observing how it evolves. Every new generation of cells (which can be either live or dead) is a pure function of the previous generation and is described by this set of rules:

For more information, patterns and current news about the research involving Game of Life check out the brilliant LifeWiki at conwaylife.com.

The following applet visualising the Game of Life has been developed as part of the coursework for Object-Oriented Programming at the University of Cambridge, all code was written and compiled in Sun's Java SE 1.6.

Click on any of the screenshots or the button below to launch the Game of Life (and if nothing shows up, make sure that you have the Java Runtime Environment (JRE) installed). 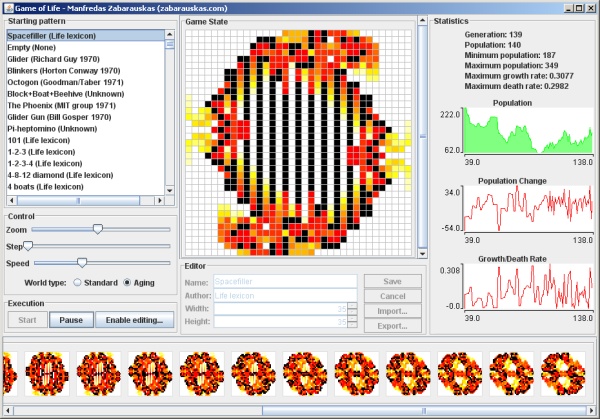